By aliirose | Published
Jan
19
2013
I should currently be packing for a week skiing in France but love to procastinate with pictures so here is a quick set of photos from the last few weeks.  I have been rushing around everywhere doing a massive amount of driving, some kayaking, rock climbing, winter (mixed) climbing, walking, demolition (at bobs house) and some profesional development courses.

I spent a great day on Ben Nevis with Miles climbing Tower ridge (IV,3).  I got this shot on descent (it was dark when we walked in).  You can see the CIC hut on the far left of the image and how little snow was present.  We climbed Tower ridge pretty quick able to move on just rock for the first section and get crampons on at the little tower. 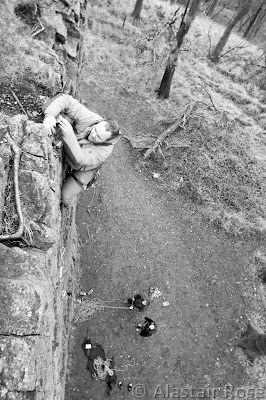 Bob topping out of DT’s Route at the Limekilns
The day before going to the Ben I was at Limekilns with Miles, Hannah and Bob.  Bob told a story about how people go on ski trips every year thinking they can ski as well as the last day of their trip the year before and break their legs.  Then after not climbing for many months Bob jumped on the lead on “DT’s Route” (VS 4c) which we later found out might be a little harder the way we all climbed it. 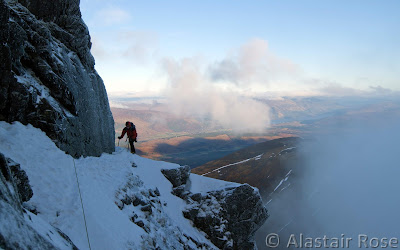 Miles approaching the Eastern Traverse.  One of the reasons we were able to climb so quickly was the old footprints in the snow and the clear weather. 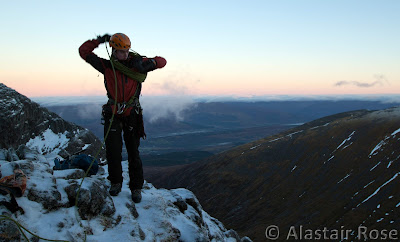 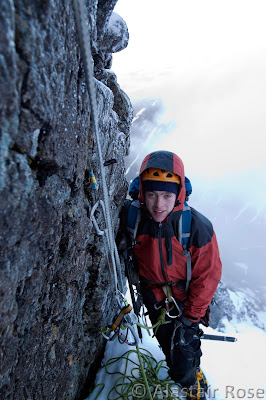 Anyone who has climbed with Miles knows this face – it says – please let me lead the next pitch, please!

Meanach Bothy (far right) on a rainy morning.
After the day on Ben Nevis my van decided it needed a new alternator.  Luckily Fort william is a good place to break down and i decided to head into the mountains on my own till it was fixed.  This was in the middle of some atrocious weather but I found a few bothies to stay in!  I waded the river on the left in my underwear in the dark on the first night trying to find this one! 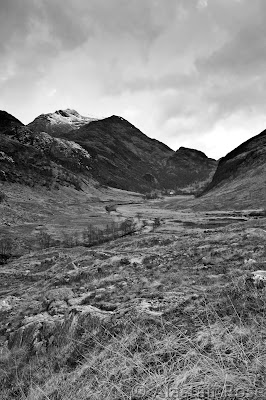 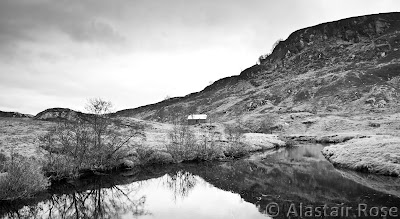 Leacach Bothy (far left) at the base of Stob Ban.  I did a few Munros from this bothy but mainly just hid from the high winds and heavy snow. 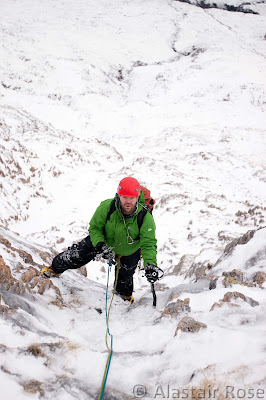 Bob seconding up the 1st pitch of Inglis Clark Ridge (III) on Stob Criese.  This pitch was meant to be a nice water ice pitch but instead was a little water ice, no gear and some frozen turf – great fun. 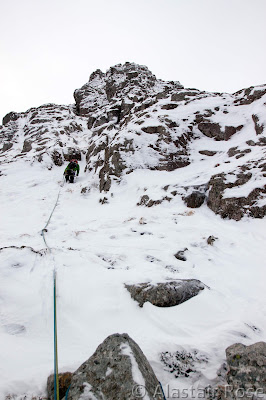 Bob leading off up the second pitch.  The route then takes a swing up the face of the buttress/ridge for two pitches

Classic shot of Black Rock cottage with the Buachille behind from where we parked to walk into the Inglis clark ridge.

Glen Etive from the top of the ridge.  This was a great day but lots of slogging through loose snow was pretty time consuming!

Now its off to france for some more snow!

This entry was posted in Uncategorized.