By aliirose | Published
Jan
04
2013
Well the Yellow Heiffer(my van) is currently packed with Kayaking gear and I am about to drive south to the Lake district for a couple of days of kayaking.  At one stage this seemed like complete madness but it is currently very warm in Scotland with the majority of the snow stripped of the mountains so now seems like quite a good option.
In May last year Wee Ben and I chatted about doing a big hogmmany in a bothy in the middle of nowhere and as the months progressed I realised that I should organise it.  I was a little more organised than usual (in that I actually invited other people) and the turn out was brilliant with some people driving for days just to be there and even an American!
A large group of us walked in on the 30th with heavy packs full of food, drink, coal and warm clothes with more arriving the next day.  On the 31st we woke up to horizontal rain and some warm temperatures so had a very short day wandering up the glen and up to a good view point and then the party started….. 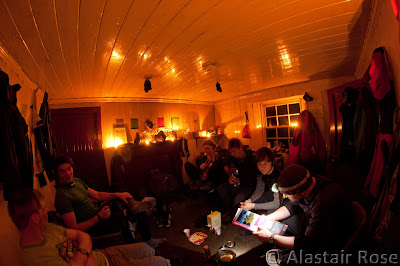 In the main room of the bothy on the first night planning the next day. 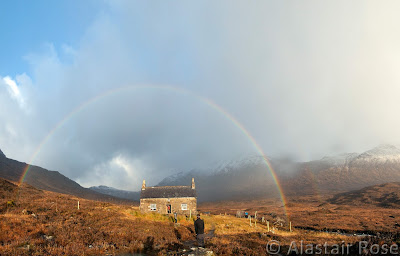 The bothy with rainbow on the last morning as we were packing up to leave. 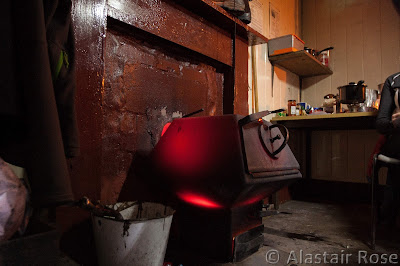 There was a lot of old coal in the fire so when we did finally get it going it got a little too hot!  This was actually a little worrying as the whole thing started to sparkle! 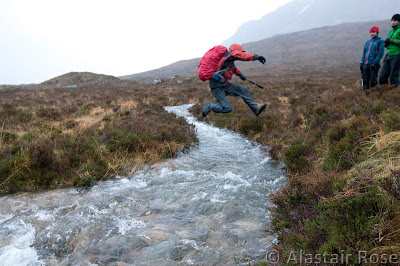 A very wet wander up the Glen.  Miles showing great technique on a river crossing

Getting near the head of the glen as squalls of snow/rain/sleet hit us.  Ruaridh leading the way. 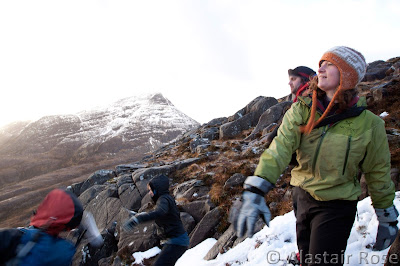 Finally it cleared enough for a snowball fight with the remaining snow. 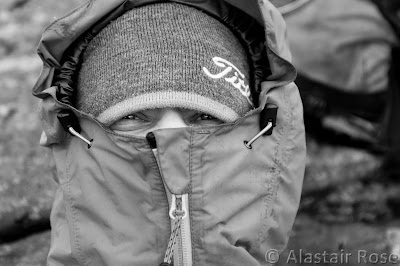 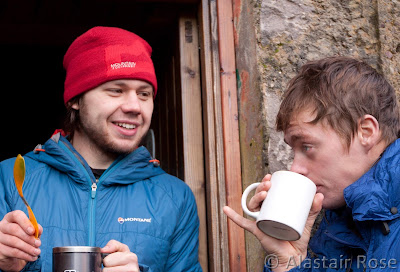 Scott and Miles back at the bothy on the 31st.  The drinking started about 1430 and ended 12 hrs later when Scott and I checked that we had in fact drank everything! 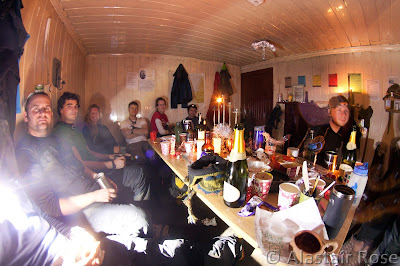 The main room of the bothy all set up for party games and lots of food – Dinner was massive involving Haggis on oat cakes, samosas, onion bhajis, chicken fajitas, cheese balls, pizza, christmas cake, cheese and biscuits and chocolate.

When it did clear on the 31st it was amazing.  Ruaridh (far right) looking down the glen back to the bothy. 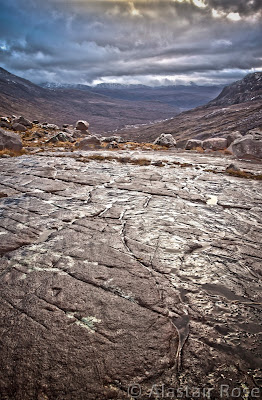 HDR shot of the sandstone slabs running with water under a heavy sky. 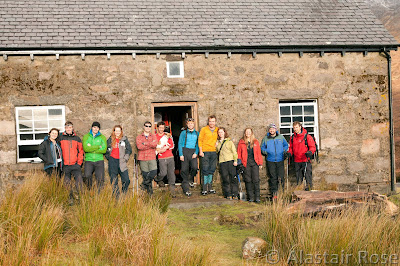 Thanks to all who showed up, it was an amazing couple of days in a brilliant place.  Same again next year?