Hanging with the King and Shanghai Sideways

By aliirose | Published
Mar
10
2012
After the first school program in Lijiang, Asia Pacific Adventure decided it was cheaper to keep myself and another staff member, Lisa in China rather than have us fly back and forth. This meant 12 days of expenses paid tourism while not having to look after any teenagers! We spent the first few days in the beautiful town of Dali and then headed to “Shangri-LA” to see another staff member Kevin and help him out on a trip to his lodge in the small tibetan village of Nidzhu. Kevin is known locally as “The King of Shangri-La” after various television companies made documentaries about him and his wife Lynne raising thier family in a remote chinese town. Being around Kevin is never boring (he cant read this as Blogspot is blocked in China, so I can write what I want) and he had arranged to take a group from “Shanghai Sideways” up to his lodge. The lodge is normally 4 hours of rough driving away and Lisa and I agreed to go along to help with the food for the 14 motorcycle and sidecar riders. Shanghai Sideways was shooting a promotional movie as well as some photos for their website so it was great to hang out in the support jeep with Kevin and even take a turn in the sidecar (hopefully even appearing in their promo movie!). 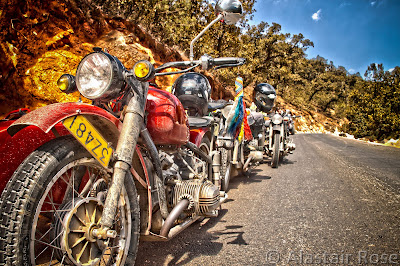 The sidecars lined up on the road to Nidzhu. These are 1950s BMW sidecars (or chinese equivalents). 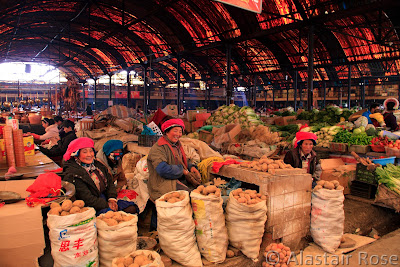 Shopping for groceries with Kevin before meeting the folks from “Sideways”. I thought the shopping for vegetables was crazy until we went to the meat counter. Its no wonder that all the staff at APA got Guardia the week before when we saw how food is bought! 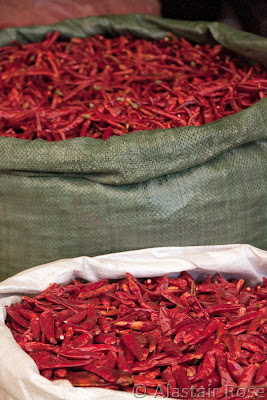 Huge bags of Chili on sale. My system slowly got used to the heat in the food. 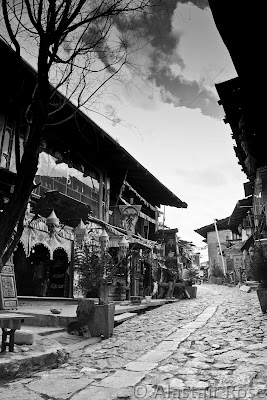 Street in the old town of Shangri-La near Kevin and Lynnes house. 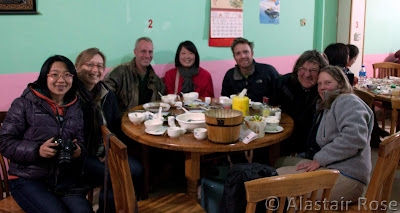 Another huge meal. Basically all I have done for the last month is eat. This was a meal with 4 different types of Yak (all of which were cooked with Chili) with Kevin and Lynne (far right) and some of their friends. (Photo taken by Lisa) 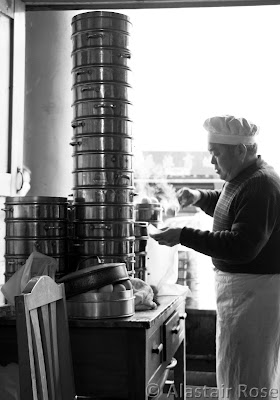 My favourite – Jiaozi ((jow-zha) or chinese dumplings in the uk/pot stickers in the usa.) all racked up ready for another massive breakfast. Lisa chilling in the back of Kevins Jeep as we wait again for the sidecars. 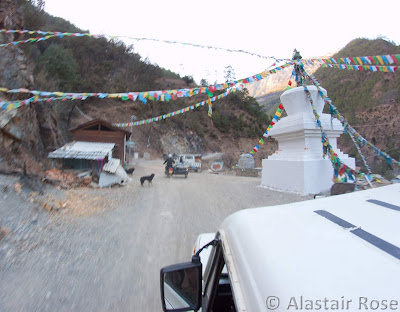 Hanging out of Kevins Jeep following the sidecars (note the tibetan mastif barking at the bike going past it!) as we pass a buddhist Stupa. 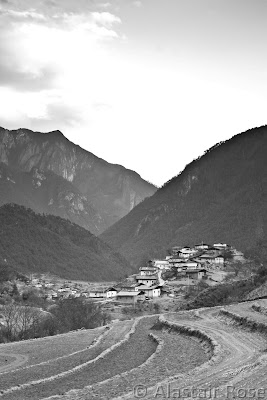 View downt the valley from Kevins lodge in Nidzhu. The 4 hour drive ended up taking more like 10 after a few minor breakdowns on the bikes, the second support Jeep giving up and one of the sidecars drving of the road. 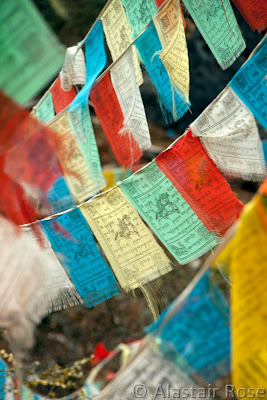 Prayer flags outside the lodge. 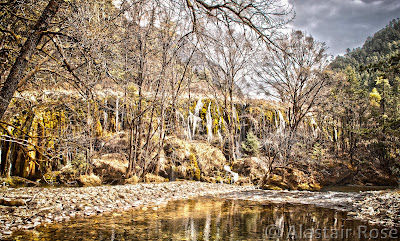 Multi Coloured waterfall a couple of hours hike up the valley from Nidzhu. Nidzhu is in Chinas first national park which has huge hiking potential. In summer this would be an amazing place to swim and hang out for an afternoon.
Video shot from the Sidecar. Shortly after this I decided to get back in the Jeep with Kevin as we hit dirt roads. The next thing we knew, Simon the driver had driven off the edge and the bike was in pieces. Luckily Simon managed to jump free as the bike went over and was fine except for some scratches. The bike did not survive!
Am now back in Hong Kong for the next few weeks where it is currently cloudy and grey. Hoping for some climbing and kayaking if the weather clears up.
Check out Shanghai Sideways website – http://shanghaisideways.com/
This entry was posted in alastair rose, ali rose, Lijiang, Shanghai Sideways, Shangri La.