By aliirose | Published
Jan
03
2012
This post is a little different to most in that a lot of the pictures were not actually taken by me. As some will know I took a bit of a fall climbing in Stob Coire an Lochain in Glen Coe so the bottom photos are purely from this. The last few are from my first trip back into the mountains over hogmanay with Ruaridh, Ann Marie, Robin and Jaffa the Dog to Coire Mor Bothy. We arrived to find a new barrier across the road forcing us to walk a little further but we still got in in good time. We met some other people at the bothy and saw in the new year with them and some whisky (though we only lasted till 11!)
The healing is going well with it getting better every day though it was a bit achy sleeping on the bothy floor! 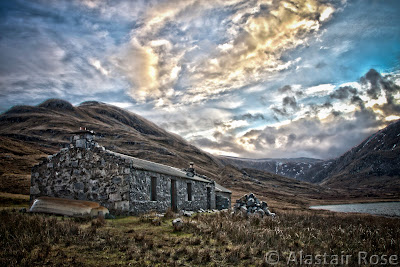 Coire Mor Bothy is actually the far end of this building with the doorway nearest being “Magoos” Bothy. I think this might be kept quiet by the Mountain Bothies Association as this really is one of the best bothies ever and the are has a huge amount of Winter Climbing, Summer Climbing and Skiing potential. 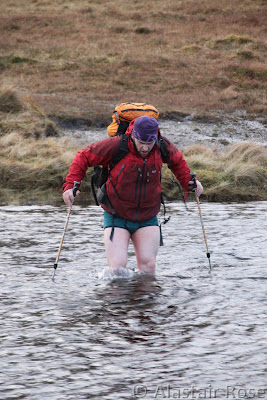 Ruaridh crossing the river after our day doing the round of Seana Braigh. It was this or another hour of walking. 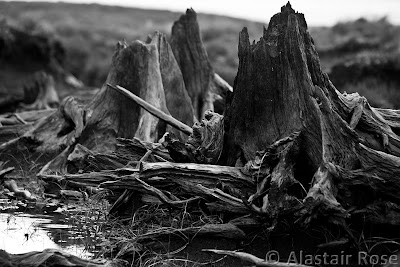 Old Caledonian forest exposed by the river from the peat bogs – probably the most impressive one of these I’ve seen at the head of the loch. 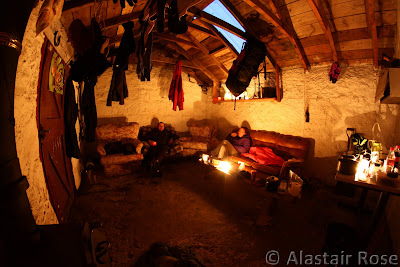 Ruaridh and Ann-Marie relaxing on the afternoon of the 1st while clothes dry around them.
The photos from the fall… 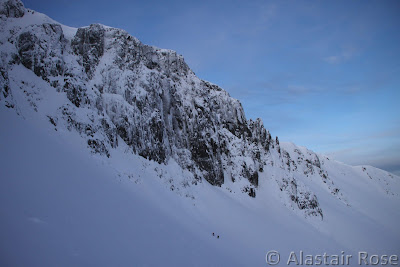 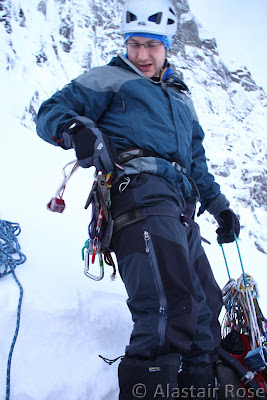 Graham racking up before the first pitch. 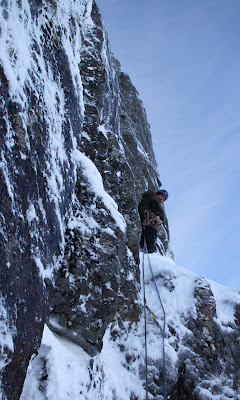 Me on the ledge that I bounced off on my way down (photo by Graham). You might just be able to spot the bulldog clipped to the right hand rope. I attempted to move up and right from where I am standing in the picture – I still dont think it was the right way. 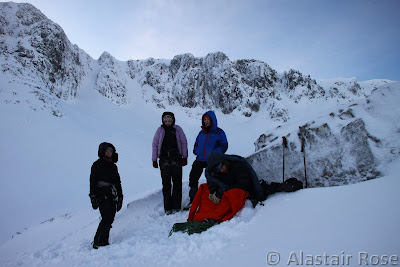 Being fed hot juice while we wait for the helicopter (photo by Graham). The buttress I fell off is the left hand side of the coire. I was climbing the second pitch which would have got us close to the big snow band running up the left side of the crag. 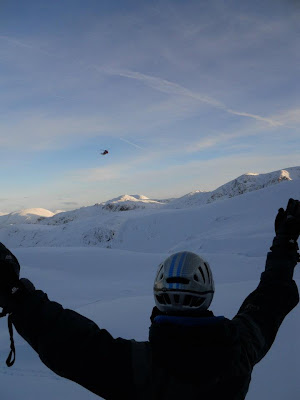 Graham signalling the helicopter in (Photo by Emily Roo) 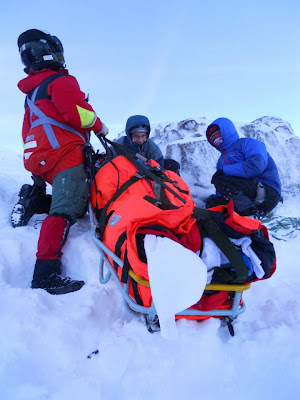 Me being packaged up ready for my flight – I was very cold by this point as graham had not let me eat anything and I was in shock. I was still warm enough to be annoyed by the neck brace which I later convinced them to take off. (photo by Emily Roo). If you look carefully you can tell Graham is grinning inside his hood. 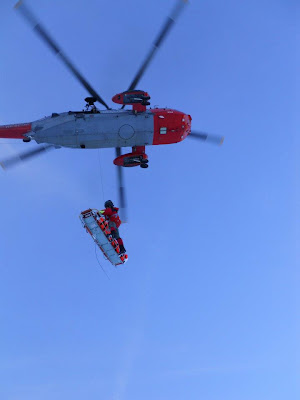 Me heading out the easy way (Photo by Emily Roo) 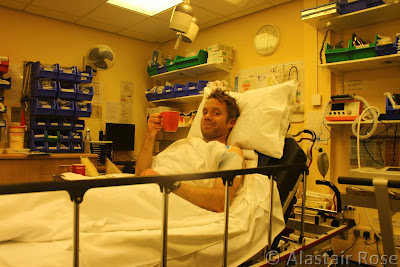 In the Fort William hospital with a cup of tea. They are so used to dealing with climbers they didn’t even cut my clothes off. (Photo by Graham)
Trying to take it easy and let my ribs heal has given me lots of time to consider how great we have it in the UK with free health care and Mountain Rescue. Hopefully I wont need it again any time soon but its good to know its there.
Next up for me is some more resting and then hopefully more of the usual skiing, climbing and taking pictures before I head to Asia in February.
Happy New Year.
This entry was posted in Climbing fall, mountainstothesea, Stob Coire an Lochain.